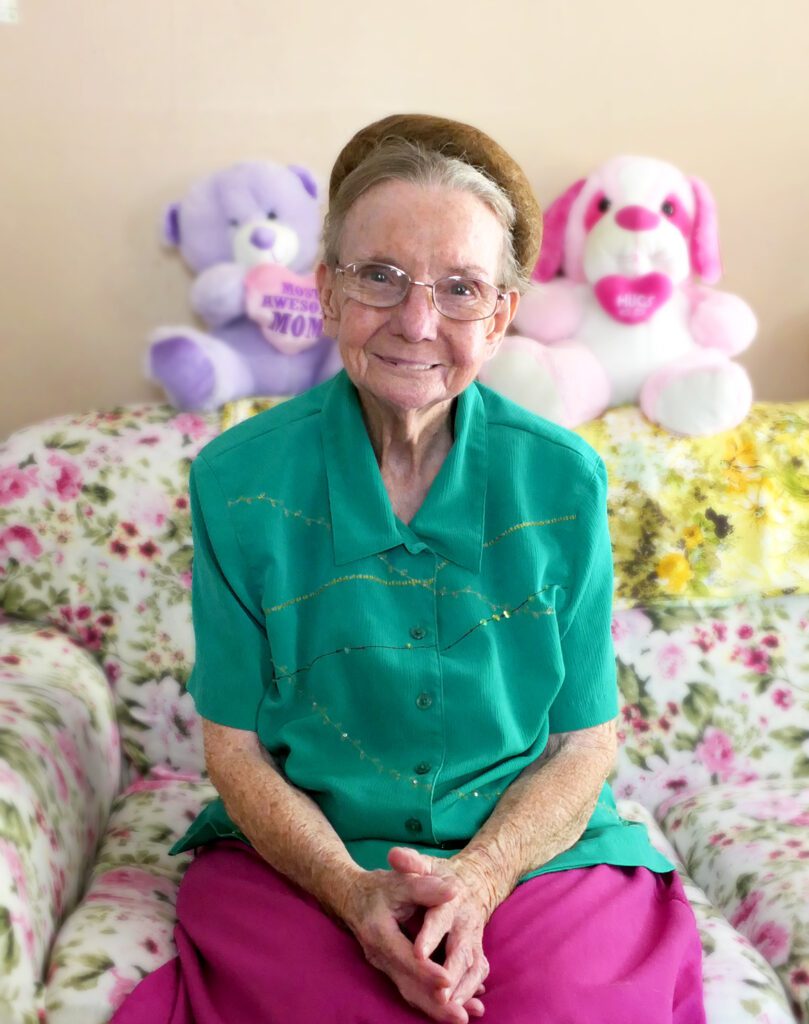 The mailed contributions are to the Emergency Fuel Fund for the Elderly. That program, funded entirely by donations, helps older adults in MEOC’s three-county service area in emergency heating situations. In her letters, Ms. Jessee never fails to mention her continued prayers for those in need.

She has made regular donations to the fuel fund for about five years. Sitting in the living room of her home near Pennington Gap in Lee County on a recent July morning, Ms. Jessee said she gives what she can afford, knowing it will benefit someone who needs assistance during the coldest times of the year.

Ms. Jessee has lived her entire life on Ely Pucketts Creek Road and has been in her current home for about 17 years. Her sister and brother-in-law built the house, and her parents later lived there too. Ms. Jessee’s son, 65-year-old Carl, lives with her. They are kind and welcoming to visitors and chat easily about their lives. A knee problem has slowed Ms. Jessee recently, but she still enjoys going to church, the same one she has attended for 54 years. Carl Jessee is easygoing and quick to laugh. Fishing is among his favorite hobbies.

After reading about the program in a local newspaper, Ms. Jessee began regularly giving to the Emergency Fuel Fund. Her reason for her longtime support is simple. “I just want to help if I can,” said Ms. Jessee. She noted that she herself has received assistance from the program in the past.

Son Carl echoes his mother’s sentiment. “The Bible says you’re supposed to help others,” he said from his chair on the porch just outside the front door.

“I always say the fuel fund is the community’s fund, and it truly is. Every cent given by individuals, businesses and churches is poured back into the community. The money is spent at local businesses to help local people in need,” Craiger stated.

The fuel fund annually assists about 1,000 older adults in MEOC’s service area of Lee, Scott and Wise counties and the City of Norton. Assistance is provided by paying electric bills or purchasing and delivering heating oil, propane, coal or wood. During the last fuel season, November 1, 2020, to March 30, 2021, the fund assisted 963 households with heating-related emergencies at the cost of nearly $196,000.

With the program’s largest annual fundraiser approaching, the community’s support is greatly needed. The MEOC Walkathon will be on August 29 on the Greenbelt Trail in Big Stone Gap. Registration for the 5K event will begin at 1 p.m. that day. The walk will follow at 2 p.m.

The walk’s fundraising goal is $165,000. Every cent raised at the event will go directly to pay heating expenses for an older person in need. The fuel fund receives no state or federal monies.

If you’d like to help keep an older person in your community warm this winter, you can support the Emergency Fuel Fund in several ways.

● Donate. If you are unable to walk but would like to support the cause, you can easily contribute in one of the following ways:

● Spread the word. Everyone can help by telling family, friends, and neighbors about this event.