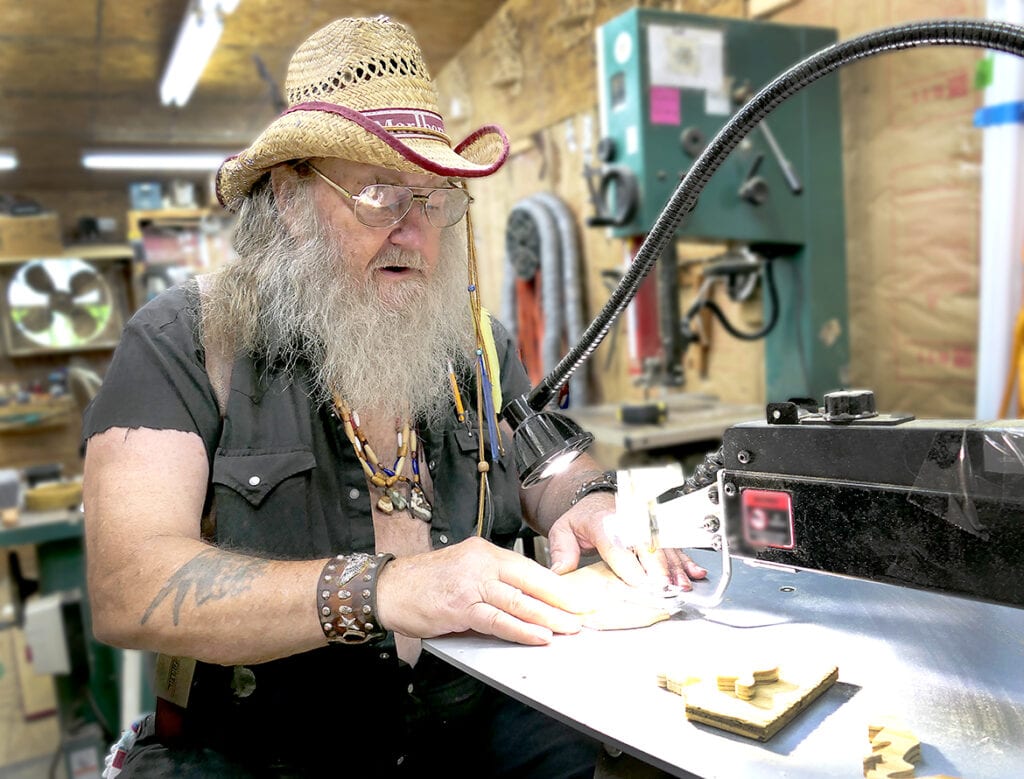 Seventy-six-year-old Paul “Cowboy” Young loves to show people around his workshop in the backyard of his Dryden home in the northeastern part of Lee County.

“Now, come on in here … let me show you this,” Young beckons. He wears a broad grin underneath his long gray beard as he begins a tour of the workspace he built himself. He’s dressed in black with jeans, a sleeveless western button-up shirt and cowboy boots. A straw cowboy hat rests atop his head, and his light brown hair reaches his shoulders.

The rooms, from floor to ceiling, are chock-full of worktables, power tools, gadgets, equipment, supplies, completed and still-in-the-works projects and much more. All of it is carefully organized.

Young is animated as he chats about his hobbies. His love for carpentry and woodworking began when he was a little boy. “I got ahold of my dad’s hammer, and that was it. My mother said I’d nail down anything that wasn’t already,” Young joked.

Woodworking tops his lists of hobbies, but he also enjoys making leather crafts, like the watch band on his left wrist and the cuff bracelet on his right. He collects replica guns, arrow heads and lots of other things he finds interesting. He likes to stay busy. “I’m not sittin’ down,” Young declares. 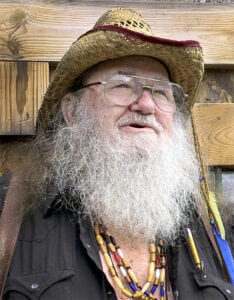 Young is resourceful too. He’s a planner and a saver. For example, he’s saving up to buy his next pair of eyeglasses in three years. His short-term focus is saving enough to get his pickup repaired.

Like many elderly residents in the Mountain Empire region, Young lives below the federal poverty level. So an unexpected need or increase in regular monthly expenses, such as when his electric bill rises during the mountains’ coldest times of year, is a hardship.

He sets his thermostat low in the winter, he said, to prevent a huge increase in his electric bill. “Sometimes I’ll have to wear longhandles, and I’ll pull a pair of jogging pants over top of that, plus a long-sleeve shirt over a longhandle top. Then I’ll pull on my housecoat too. I wrap up good. It gets cold in there sometimes, but I have to live with it,” Young continued.

So Young is appreciative of the past help provided by the Emergency Fuel Fund for the Elderly, a program of Mountain Empire Older Citizens, Inc. He is just one of the more than 1,000 older individuals in Lee, Scott and Wise counties and the City of Norton who was assisted by the fuel fund last winter at a cost of over $227,000. The fund pays for wood, coal, propane, heating oil or electric bills for those who are at least age 60 and are at or below 150 percent of federal poverty guidelines.

The Emergency Fuel Fund for the Elderly receives no state or federal money. It exists because of donations from businesses, faith organizations, civic groups, local governments and individuals committed to making sure the region’s most vulnerable residents don’t have to choose between staying warm and other things they need, such as medications.

Each year, the MEOC Walkathon is the program’s largest fundraiser. Ordinarily held the first Sunday in May, this year’s event was cancelled because of the COVID-19 pandemic. A virtual event is being held instead. The campaign kicked off in June. Supporters are asked to turn in donations by Sept. 30. The goal is $165,000. As of Aug. 24, a little more than $59,000 had been raised. With just about a month remaining in the fundraiser, the community’s support is needed more than ever.

HOW TO MAKE A DIFFERENCE

Participate as a walker. A virtual walk is a real walk done at your convenience. To participate, simply complete a 5k walk before Sept. 30 at whatever time and location works best for you. You may share pictures, videos and comments on social media using the hashtag #MEOCWalkathon2020 to show your support. As always, individuals who raise $100 or more will receive MEOC’s annual Walkathon t-shirt. To participate, download your pledge forms here or call MEOC at (276) 523-4202.

Donate as an individual. If you are unable to walk, but still want to support the cause, your contribution can be sent to MEOC, P.O. Box 888, Big Stone Gap, VA 24219. You may also click here to make an online donation.

Finally, everyone can help by spreading the word to family, friends and neighbors about this fundraiser.