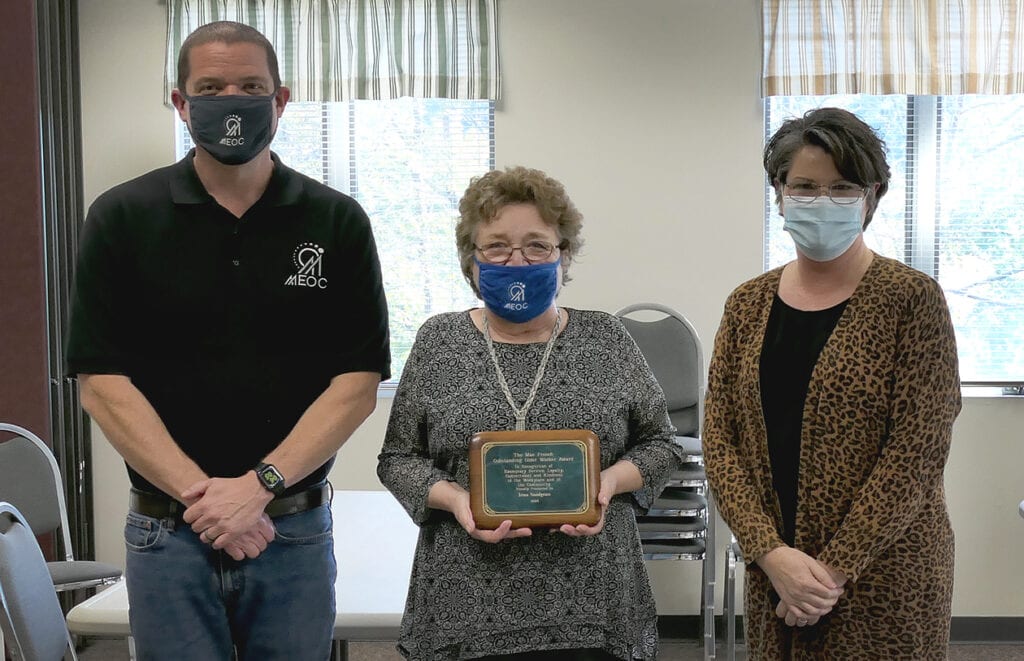 For more than four decades, Irma Snodgrass has been the face of Mountain Empire Older Citizens in Scott County.

As an MEOC employee since 1979, the Weber City resident has traveled countless miles in the community connecting older residents to services that help them remain safe and secure in their homes. With 41 years of service to MEOC, Snodgrass has the honor of having the most years of employment among all staff members. Her devotion to the agency and its clients are among many assets that helped earn Snodgrass the 2020 Mae French Outstanding Older Worker Award.

The annual award recognizes an older MEOC employee at least age 60 who demonstrates the qualities of service, loyalty, commitment and kindness exemplified by Mae French in the workplace and the community. French became an MEOC employee in 1976 at age 81 through the Green Thumb Program. She worked at the agency’s Norton nutrition site until an illness in 1993 forced her to retire at age 98.

The award has historically been presented during MEOC’s Older Worker Recognition Luncheon. However, since the 2020 luncheon was canceled because of the pandemic, the award presentation took place during an October 6 virtual staff meeting. MEOC Older Worker Program Director Carrie Stallard made the announcement, highlighting the qualities that have earned Snodgrass the respect, admiration and love of her coworkers, clients and community.

While she has influenced many lives during her career, Snodgrass doesn’t consider herself or her work as more remarkable than another’s. She has enjoyed opportunities to help others and has done so whenever able.

Snodgrass has also watched MEOC grow and evolve during her career. When she began work at MEOC, the agency had six vans, operated seven nutrition sites and employed fewer than 10 full-time employees – a far cry from the agency’s size and scope of services today.

Snodgrass’s memory is filled with stories of clients, co-workers and events. She has visited clients in places a four-wheel-drive couldn’t reach, sometimes sloshing across creeks or through mud and snow to get to a home. One of her most memorable and inspirational clients, she said, was a lady in Gate City who lived to be 111 years old. The woman received a state caregiver of the year award for caring for her 80-year-old nephew.

“It’s been good,” Snodgrass said of her time at MEOC. “Forty-one years passes quicker than you think,” she added.

While Snodgrass doesn’t consider herself special, those who have worked with her over the years quickly cite a long list of reasons she is valued.

In a letter nominating Snodgrass for the Mae French Outstanding Older Worker Award, Marilyn Pace Maxwell, who established MEOC in 1974 under the Older Americans Act and led the agency as executive director for 38 years until her retirement in 2012, noted that Snodgrass has always been committed to MEOC’s mission. Maxwell hired Snodgrass as an outreach worker. She noted that Snodgrass has been an important part of shaping and developing MEOC’s services during the last four decades.

“Since her first days at MEOC, Irma has been a consistent, responsible and respected advocate for older citizens, family caregivers, persons with disabilities and Southwest Virginians of all ages including children,” said Maxwell.

“(Irma’s) work saves lives and keeps people safer and more secure in their own homes,” she added.

Maxwell also noted Snodgrass’s awareness of the community she serves. “I think that Irma is so very successful in her efforts because of, among many other reasons, her understanding of the central importance of community as a partner in developing and delivering essential services in our rural, mountainous region.

“Particularly in Scott County, Irma has always been the face of MEOC. She knows her county and its people and uses that knowledge to improve the lives of those she serves. She is relentless in her service to others,” stated Maxwell.

MEOC Care Coordination Director Judy Willis has also worked with Snodgrass for decades. She noted that Snodgrass has been instrumental in the training of every currently serving care coordinator including Willis herself. “When I first became director, I answered every question with, ‘Go ask Irma, and then come back and tell me what she said!’” said Willis.

Beyond her knowledge and experience, Snodgrass is respected for her kindness and her values. And her culinary skills are legendary. When coworkers and colleagues describe Snodgrass, two words are frequently spoken: servant’s heart.

MEOC Emergency Services Director Marsha Craiger said Snodgrass is loved, well respected and adored by everyone. She is “the perfect example of a humble person with a heart of gold focused on others,” added Craiger, who has worked with Snodgrass for 10 years.

“Irma is always that one person who will go above and beyond to see that the clients are taken care of and their needs are met,” noted Craiger.

Oliva Harvey, options counselor at Junction Center for Independent Living and a long-time colleague of Snodgrass, describes Snodgrass as an inspiration and a “wealth of knowledge when it comes to programs, common sense and interacting with people and resources.”

“Irma is a genuine person. She cares for everyone that comes into her life … We just love her,” Harvey stated.

For more information about MEOC and its programs and services, call (276) 523-4202. MEOC serves Lee, Scott and Wise counties and the City of Norton.